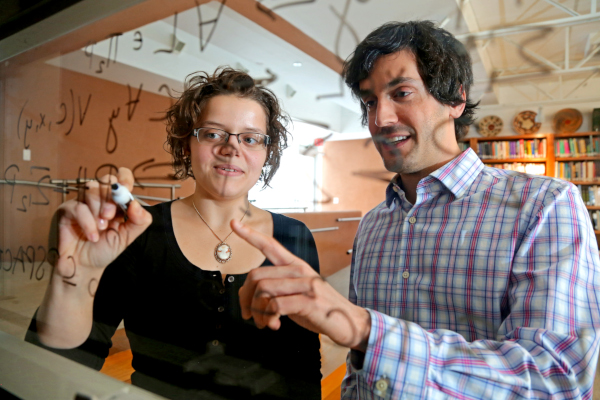 These projects occupy an often ill-explored, liminal space between the traditional domains of academic theory and application. We are currently running two such projects; one on cyberhate, social polarization, and counterspeech, and a second on applied scale. Applied projects are led by SFI faculty, powered by SFI Applied Complexity Fellows and are supported by industry sponsors.

The goal of this Applied Complexity Research Project is to explore the drivers and mechanisms through which online discourse propagates hate, misinformation, and polarization. One key goal of the project is to use principled social science theory, machine learning, and natural language processing to develop tools and science that empower citizens to counter cyberhate. Early results of this effort include the first large-scale empirical analyses of counterspeech on Twitter. This work provided empirical support for the notion that counterspeech can be effective and that coordination can significantly increase the efficacy of a counterspeech initiative.

This project also hosts CounterBalance, a monthly seminar series aimed at sharing the latest research with, and facilitating a candid discussion among, scientists, practitioners, and policy makers working on issues of cyberhate, misinformation, social polarization, and radicalization.

For more information on this applied project, or the CounterBalance seminar series, please contact tracy@santafe.edu.

Over the last 15 years, SFI has enabled a significant research effort to understand scaling in human organizations. The broad background of this field can be found in West 2018. This line of socially-oriented research borrowed heavily from earlier explorations of allometric scaling’s generative mechanisms (see West et al. 1997 and West et al. 1999). Well-known allometric scaling results include the fact that all mammals have, on average, one billion heartbeats in a lifetime – despite the fact that mice live an average of two years and elephants live an average of 60 years. Another well-known result is that a species’ average metabolic rate scales along a ¾ power law relative to average mass – thus while the average elephant weighs about 10,000 times more than a rat, an elephant only needs to consume about 1000 times as many calories as a rat to survive. Complexity science has shown how these previously counterintuitive results can be derived from network properties. Other recent work in biological scaling has also shown how these relationships shift with the architecture of organisms, and from these results the minimum and maximum size of a particular architecture can be determined (see Kempes et al. 2012). Thus, not only can the theory determine the relative tradeoffs of organisms with different size, it can also determine the ultimate limits of a particular architecture.

After understanding the role networks played in generating these scaling phenomena in the biological context, a group of SFI affiliated researchers explored scaling phenomena in human organizations driven by social networks. The superlinear scaling results observed in cities are among the most well-known findings from this effort (see Bettencourt et al. 2007) – in the context of cities this superlinear scaling implies that if City A’s population is half that of City B, then City B should enjoy a 15% per capita increase over City A in GDP, innovation, crime, and disease. Although these power-law-based scaling models explain a surprisingly high amount of the variance observed in the data, there are significant deviations from the central tendency indicating over- and under-performance for particular cities.

Subsequent work has begun to explore the insights that could be gleaned by studying how cities deviate from the scaling predictions (see Bettencourt et al. 2010). However, this field is still developing. The plan for this project is to fully harness scaling phenomena to make predictive assessments of the performance of human organizations, and at the same time to uncover further mechanisms driving these scaling relationships.

Sponsorship of an Applied Complexity Project is a unique form of collaboration between industry and academia. We use four different mechanisms to help sponsors engage with the research and the ideas generated in the project: