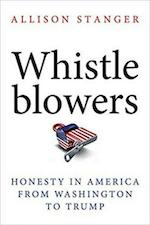 media attention, published as it was on September 24, the same day an impeachment inquiry was launched against President Trump based on an anonymous whistleblower’s complaint.

Stanger’s book provides historical perspective on the role of whistleblowing in American democracy, where whistleblowers expose corrupt, illegal, or unconstitutional acts. The volume details a series of whistleblowing events, from the persecution that led to the first whistleblower protection law in 1778, through Edward Snowden’s story, to the present imbroglio involving Trump.

As Stanger’s book reveals whistleblowing as a vital safeguard to the rule of law, it also details how personally costly it can be to the whistleblowers themselves. A common attack on whistleblowers is to attempt to discredit them or the information they expose. In her op-ed for The Washington Post, Stanger describes how this tactic is playing out in the current proceedings. She also draws an important distinction between whistleblowers and “leakers” who expose secrets that don’t necessarily amount to misconduct.

“Regardless of political affiliation,” Stanger wrote, “Americans need to focus on the shocking substance of the information being revealed and insist that genuine whistleblowers — judged by the content of their complaints rather than their motives or the consequences they suffer — be both celebrated and protected.”