Well-mixed models do not protect the vulnerable in segregated societies.

African Americans are dying from COVID-19 at a rate two to four times higher than white Americans.2,3 Per capita cases are higher on the Navajo reservation than in every U.S. state.4 What are the causes of this disparate impact of COVID-19, why did epidemic models not predict it, and what can be done to address it?

Myriad explanations for racial differences in COVID-19 exposure and mortality have been proposed, particularly focused on the work circumstances, living conditions, health status, and healthcare access among African Americans. African Americans tend to live in denser urban areas and multi-generational households, and to be essential employees who cannot work from home. They are likely to have less paid sick leave and health insurance, but more underlying medical conditions such as diabetes, cardiovascular disease, sickle cell disease, asthma, and exposure to environmental pollutants that elevate COVID-19 mortality risk. African Americans are often turned away or have the severity of their condition underestimated when they seek medical care. The history of unethical medical experimentation and exploitation (e.g., the Tuskegee syphilis experiment and Henrietta Lacks’s cancer cells) has led to community-level distrust of the medical system. When the novel coronavirus initially spread among international travelers centered in China and Europe, myths gained traction on social media that people of African descent could not contract COVID-19.

Higher COVID-19 mortality, particularly at younger ages, is consistent with other health disparities in African Americans: a fourfold greater probability of dying from complications during childbirth, 20 times greater chance of heart failure before age 50, and a four-year-shorter lifespan.5 The stress of living under the threat of racism appears to age black bodies faster than white ones. The multiplication of many inequities over time results in greater disparity; black income is 60 percent of white income, but black wealth is only 10 percent that of whites.

Native American COVID-19 risk is also influenced by extreme inequity in health and economic circumstances, including lack of services as basic as running water and inadequate federal funding of health care.6 The Native population is a staggering 17 times more likely to be diagnosed and over 10 times more likely to die from COVID-19 than the white population in New Mexico7 (one of the few states reporting sufficient data to make such comparisons). Previously isolated Native populations were decimated by diseases upon European contact and were also four times more likely than others to die in the 1918 flu pandemic.8 COVID-19 threatens the very survival of small Pueblos like the Zia with fewer than 1,000 members. The proximate socioeconomic factors correlated with COVID vulnerabilities are themselves the manifestation of hundreds of years of structural racism that has left formerly enslaved and colonized populations with poor physical and economic health and often in spatially segregated places.

How do epidemic models incorporate these racial and socioeconomic realities? Thus far, they don’t. Initial epidemic models, and most that still influence pandemic policies, assume “well-mixed” populations. More sophisticated network models consider different categories of people and their risk of infection and mortality,9 but far more work is needed to incorporate systematic correlations among epidemic factors within particular groups in particular places. More often, people are modelled like identical balls bouncing randomly in a lottery machine, equally likely to contact infection, become sick, infect others, or have their number drawn as the unlucky one to die. However, people are not equally vulnerable, and America is not well mixed.

One of the greatest determinants of physical and economic health is the zip code in which you were born. Zip code is a powerful predictor of the chance that you will go to college or prison, that you will have heart disease or asthma, whether you will drive a bus or work safely at home and order your groceries online. Like wildfires that burn where the winds blow and the grass is driest, the spread of disease is determined by a template of risk and vulnerability laid out in physical space. In America, that space is largely determined by race.

Zip code has long been used as a proxy for race. Redlining was the deliberate practice of denying Black Americans access to safe neighborhoods with high property values and good schools. Now zip code is used in algorithms that determine where predictive policing is concentrated and eligibility for loans and higher credit.10 The spatial segregation of Native and African Americans have different historical causes, but similar consequences are clearly visible (fig. 1). The zip codes, counties, and territories where African and Native Americans are concentrated are the deadliest places in America. 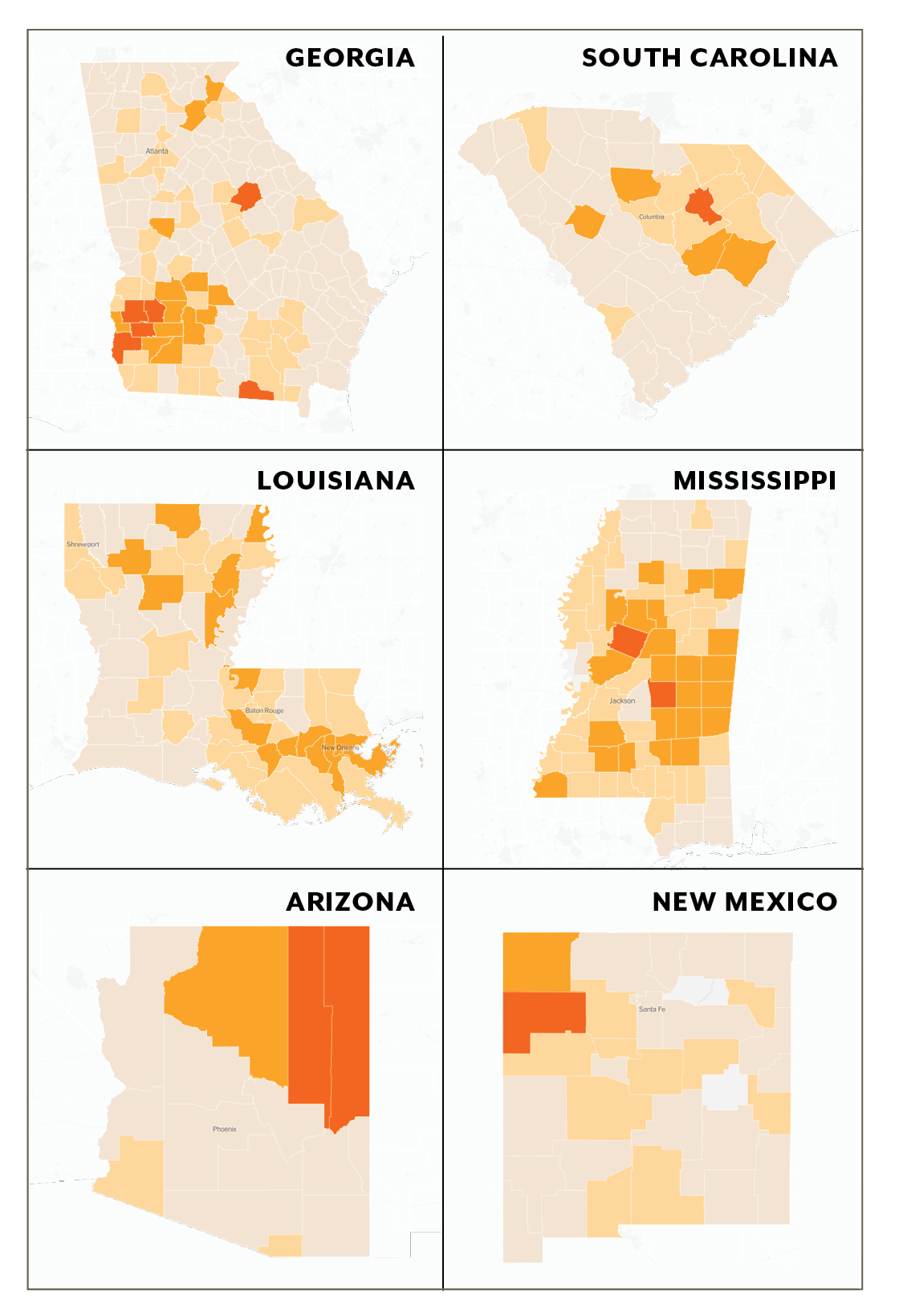 Figure 1. Per capita positive cases (higher values in darker colors) in the four states with the highest percentages of African Americans, and in Arizona and New Mexico with large Native American populations.

Complex systems thinking developed powerful and mathematically tractable epidemic modelling approaches that mitigated unfettered exponential growth of COVID-19 in the general population. Yet, as many authors in the Transmission series have pointed out, the simplifying assumptions that allow for powerful broad scale predictions are only a starting point. Models need to incorporate the systematic and structural features of societies that determine how both policies and physical space mediate disease spread.

Complex-systems thinking should emphasize that viral spread is not an idealized mathematical process taking place in a vacuum. Disease is an emergent phenomenon whose spread and severity is a consequence of the properties of the SARS-CoV-2 virus, the age, health, occupation, and socioeconomic status of individuals, and societal structures which cause disease to spread differently among different people in different places for different reasons.

Disease spread is an inherently multi-scale spatial process. It is caused by the entry of a nanometer-sized virus into a cell, where the probability of that infection is influenced by the space in a crowded factory, nursing home, or prison, by the availability of healthy food or prevalence of air pollution in a neighborhood, and by a nation’s social structure, which determines the level of stress, inflammation, and cardiovascular health of the body that cell inhabits. COVID-19 also disproportionally impacts ethnic minorities across the globe.11 It will grow where the most vulnerable are concentrated in refugee camps, favelas, and war-ravaged cities.

How do we find a path forward? Disparate impact matters not just for predicting who is at risk, but also for prioritizing who is tested, isolated, economically supported, treated, and vaccinated. As in civil rights law, mitigating disparate impact does not require ascribing intent or completely disentangling causal factors. How can our response to this disease increase how resilient the most vulnerable populations are to the next pandemic, the next economic shock, and the looming climate crisis?

COVID-19 racial and ethnic health disparities are the new frontier of human rights in the United States and globally. The international efforts in reparations for human rights violations provide a framework not just for redress of past injustices that have led to increased community risk from COVID-19, but also for forward-looking provision of free access to community health initiatives located specifically in the places where the most vulnerable populations live. COVID-19 maps show us where those places are (fig. 1).

A complex-systems approach to addressing past inequities would consider the historical, layered, and interacting factors that may be impossible to disentangle, but which collectively put certain populations at highest risk. The goal is not just to repair harm, but also a concerted effort to make people and places less vulnerable to the next pandemic: lowering rates of diabetes, increasing access to healthy food and caring doctors, and reducing air pollution. Such systemic changes support resiliency to survive the next outbreak in the places we already know are most vulnerable. These investments are far less expensive than blindly shutting down an entire economy. We will know we have succeeded if the next map looks different — if the location of the biggest outbreak is due to the random draw of a lottery, and not the inevitable consequence of generations of inequity.

ENDNOTES
1 Both authors are members of the SFI/UNM project on Algorithmic Justice.

5 Williams, D. R., “Miles to Go Before We Sleep: Racial Inequities in Health.” Journal of Health and Social Behavior. 2012.

11 Kirby, T., “Evidence mounts on the disproportionate effect of COVID-19 on ethnic minorities.” The Lancet. 2020.

This piece was the springboard for an article which appeared in Nautilus in November 2020.

Listen to SFI President David Krakauer discuss this Transmission in episode 34 of our Complexity Podcast.

Why the middle is neglected in politics and other spectrums

Study: Insights from two reopened schools during the COVID-19 pandemic

Virtual meeting offers a chance to think smart about ‘intelligence’

Sam Bowles and Wendy Carlin on 'Rethinking economics during the pandemic'

What defines ‘us vs. them’ in U.S. political discourse?

Blumsack: What's behind $15,000 electricity bills in Texas? (The Conversation)

Creating Turing patterns in the lab