The archaeological record can teach us much about cultural resilience and how to adapt to exogenous threats.

Read the Reflection, written 2 August 2021, below the following original Transmission.

One thing humans are particularly good at is perceiving environmental cues, adapting our cultural practices around those cues, and encoding lessons for future generations on how to prevail. For example, the practice of quarantine comes from the 14th-century convention of keeping ships at anchor outside Venetian harbors to protect citizens from unknown pathogens; the etymology of the word comes from quaranta giorni, the 40-day period sailors had to wait before disembarking. Even Charles Darwin had to quarantine before exploring foreign shores as a naturalist. This behavior remains encoded in our own 21st-century cultural practice. Take comfort in knowing the boredom we face in our homes as we socially isolate was also felt by the sailors stuck at anchor outside the shining city of Venice in the 1300s.

Lessons can come from many societies worldwide, such as these premodern examples in the U.S. Southwest. Among the Ancestral Pueblo people who lived in what is now Mesa Verde National Park and surrounding regions, challenges such as droughts and unrest led to innovations that helped the society thrive there for 700 years, though that society went through periods of prosperity and upheaval. Perhaps the most emblematic is the rise of Chaco Canyon, a large, highly centralized polity in northern New Mexico — and its rapid decline. As political hierarchies at Chaco grew, so too did increasingly large community structures built on the ability to control farming production. When productivity failed, the Chacoan hierarchical society fractured, violence increased, and society reorganized into regional communities that eschewed hierarchy. The archaeological record, bolstered by computer simulation (fig. 1), shows us how they reacted to societal upheaval; as maize farming became less predictable and violence escalated, hierarchy disintegrated. When finally the communities left Mesa Verde, walking hundreds to thousands of miles to new regions, they brought with them the accumulated knowledge of successful society, demonstrating the resilience of culture in the face of exogenous stress. The descendent communities today demonstrate much about cultural resilience and how to adapt to exogenous threats. 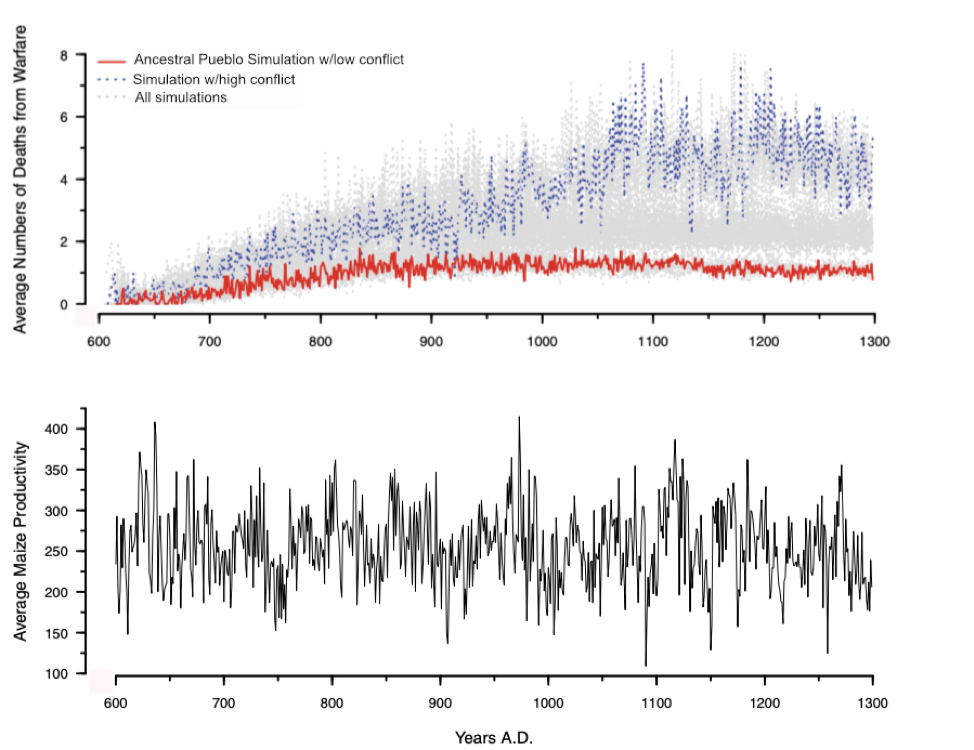 Figure 1. Top: Simulations of Ancestral Pueblo society show that, as hierarchies grow and people fight over arable land to grow maize, warfare (and death from warfare) increases. This is juxtaposed against real average maize production by year for the whole region of Mesa Verde (bottom). The decline of the Chacoan hierarchy in the late 1100s corresponds to increases in violence and decreases in predictable food. Yet the Ancestral Pueblo society continued, reorganizing their society after the sharp exogenous shocks, and rebuilding away from Mesa Verde after 1300.

This shared history and solidarity with the past suggests that we can learn from these difficult situations. The Plague of Athens (430–427 B.C.), which is estimated to have killed one-third of the city-state’s population, would have been a traumatic experience to live through. Many have speculated that it caused the demise of Athenian democracy, but the writings of Thucydides offer lessons to help us understand how diseases can exploit weaknesses in society — and how we might overcome them. Public health issues like poor sanitation and overcrowding, he notes, led to increases in casualties from the disease. These could have been avoided had officials heeded concerns about crowding. Doctors and caregivers succumbed to the disease and died; little seemed to help those who contracted it to survive. A lack of understanding of the disease sparked fear that spread through the citizens as quickly as the Plague itself. Thankfully, these writings can help us identify commonalities between how citizens reacted in 430 B.C. and how they may react today. Bolstering citizen confidence via clarity of communication from officials (such as daily briefings from state governors like Washington’s Jay Inslee), increasing our collective knowledge of the disease by applying open-science principles and sharing our models (as most scientists are doing), and thoughtful prosocial behavior by citizens (such as donating masks to healthcare workers) may help avoid the types of consequences Athenians experienced after the Plague ended.

Societies that prevail encode these lessons through oral tradition, writing, songs, and artworks. We learn to adapt and innovate — a hallmark of our species. From the first Oldowan stone tools to the development of complex communication platforms, we find ways to succeed, we persevere, we make do, as my great-great-great grandmother who lived through the Great Depression would say. Making do required focusing on what she had, not what she didn’t have, and ensuring the health and survival of her family. Countless ancestors have had to make do through challenges in the past; it is, I think, one of the comforts of being an archaeologist: knowing that I am not alone in what I face. And just like our forebears, so, too, will our society survive through this challenge. We will innovate. Our descendants will learn from the lessons we are encoding now in our cultural memory. 700 years ago Venetian sailors were stuck at harbor; 500 years later Charles Darwin also had to undergo quarantine before embarking on distant shores. In 700 years, our descendants will benefit from the innovations and lessons we are encoding today.

Listen to SFI President David Krakauer discuss this Transmission in episode 31 of our Complexity Podcast.

Reflections on Archaeology and COVID-19, one year later

The decisions people made in the past have impacts on the present and the future. More than a year into a globe-spanning pandemic, we are witnessing the impacts of the past year’s policy, public health, and messaging decisions. The result appears to be a bifurcation in the ways that citizens interpret the public health crisis. There are those who adhere to public health recommendations to be vaccinated or to wear a mask in public, and there are those who refuse the vaccine and refuse to wear masks properly or at all, thanks to rabid misinformation campaigns. Some officials are calling the current phase a “pandemic of the unvaccinated.” The more the virus can spread among the unvaccinated, the longer the pandemic will go on.

As I suggested in my Transmission, archaeology and history have lessons to offer from the past: effective leadership can instill confidence, thoughtful prosocial behavior can help quell the pandemic, and increasing collective knowledge of the disease can help with eradication efforts. On the other side, I would suggest that confronting a society-changing event poorly can lead to dramatic social unrest—something we have seen nationally and globally.

The Plague of Athens was not just a biological plague, but a social one as well. As the plague wore on, citizen confidence in the city-state’s leadership plummeted as leaders failed to address the proximal cause of the spread of the pandemic. This loss of confidence in leaders led to overwhelmed doctors, an increase in fear, and panic. It seems that effective communication could perhaps have changed the tide for Athenians.

In the past year, places with clear communication from leaders have fared much better than places with poor communication or laissez-faire attitudes. Seattle was the first urban area to reach high vaccination, with strong leadership from the governor; New Mexico, likewise, had clear rules from the beginning that seemed to make the state come through the pandemic more rapidly than others. Clear and effective leadership that does not simply rely on a heterogenous population of citizens making the “right” decisions has allowed some places to fare well. Places with few rules have suffered. Unfortunately, we cannot relax our rules to benefit individuals at the expense of the group. In the fourteenth century, rules of quarantine were developed to prevent the spread of plagues, and breaking quarantine had dramatic repercussions. Minor personal inconveniences, like quarantine, can help the group.

We lionize Athens as the cradle of democracy, but are seldom taught that something as simple as germs brought about the end of that democracy. A society is made of individuals with varying opinions, beliefs, and practices. There will be heterogeneity in how people think leadership should work. There were people in Athens who believed there was no plague. There was disagreement on how to confront it. People became nihilistic, unafraid of the law, since they were certain of their untimely deaths. The plague resulted in stricter laws of citizenship and more draconian laws; eventually, due to the weakening of the democracy, Athens fell to Sparta.

How can we avoid the democracy-destroying effects of a plague such as those that Athenians experienced? There will be a long and drawn-out recovery from the COVID-19 pandemic, both nationally and globally. We must keep up communication about the efficacy of vaccines, we must help our global citizens with efforts to stop the spread, and we must continue to think of our neighbors as our neighbors, not our adversaries.

Yet even with the challenges come opportunities for positive societal change. The mRNA vaccines provide a paradigm shift in the way we can treat infectious disease, and habits of mask wearing or social distancing may, indeed, become cultural practices. These practices emerged with this pandemic, just as the practice of quarantine was new in Venice in the 1300s. And yet, they can have impacts reaching into our future. Our future is, after all, built upon the past. In this way we do go into the future backwards; it us up to us to ensure that we can look to the past for lessons that can help us build a better future.