This time of disruption is also one of opportunity.

Read the Reflection, written 26 August 2021, below the following original Transmission.

Can the COVID-19 pandemic trigger pathways toward sustainable global futures? It seems like a long time ago, but at the beginning of 2020 our biggest threat was the failure of world leaders to agree on a common framework to combat climate change. The collapse of the Madrid summit, which was supposed to deliver tangible plans to stay within the goals of the Paris accord, again demonstrated how difficult it is to change the trajectories of highly interconnected complex systems with multiple actors.

Complex systems, such as organisms, social institutions, or the economy, all have their own histories. They develop over time and accumulate certain features that become increasingly difficult to change. We refer to those features as path-dependencies and constraints. For example, in the early evolution of multicellular organisms, certain genetic circuits performing specific functions emerged. Subsequent innovations then depended on these older parts of the genome, which, in turn, made it increasingly difficult to change them. They became, in a sense, locked in. Such constraints then limit the future possibilities of evolving complex systems.

As a consequence, these genes are highly conserved, as most mutations would have large ripple effects throughout the whole organismal system. We can actually use the conservation of certain gene sequences to reconstruct the history of life and establish the genealogical relationships among organisms. But it is not just gene sequences that are conserved. Structural features of the anatomy of organisms, which are the product of highly complex developmental processes that unfold as these organisms emerge from a single cell — the fertilized egg — are also extremely stable. This conservation of structures, or complex relations among parts, to use the language of complex systems science, explains one of the most intriguing puzzles of comparative biology: why, despite the hundreds of millions of species, living and extinct, are there fewer than fifty basic body plans, or recognizable designs, most of which are hundreds of million years old?

Actually, there are two types of constraints: internal ones resulting from the architecture of complex systems and their networks of interdependent parts, and external ones that are a consequence of rules governing the dynamics of complex systems, such as natural selection and optimization. The latter is captured by the idea of a fitness landscape with multiple peaks, or local optima, separated by valleys. Natural selection implies that better variants will increase. Under normal circumstances, every population will eventually approach the closest local optimum, but any other, even better, optimum is out of reach as the valleys of lower fitness cannot be crossed. Similarly, there are also countless examples in the history of technology where better solutions did not win in the marketplace, as there was no viable path for them to overcome initial periods of lower fitness. 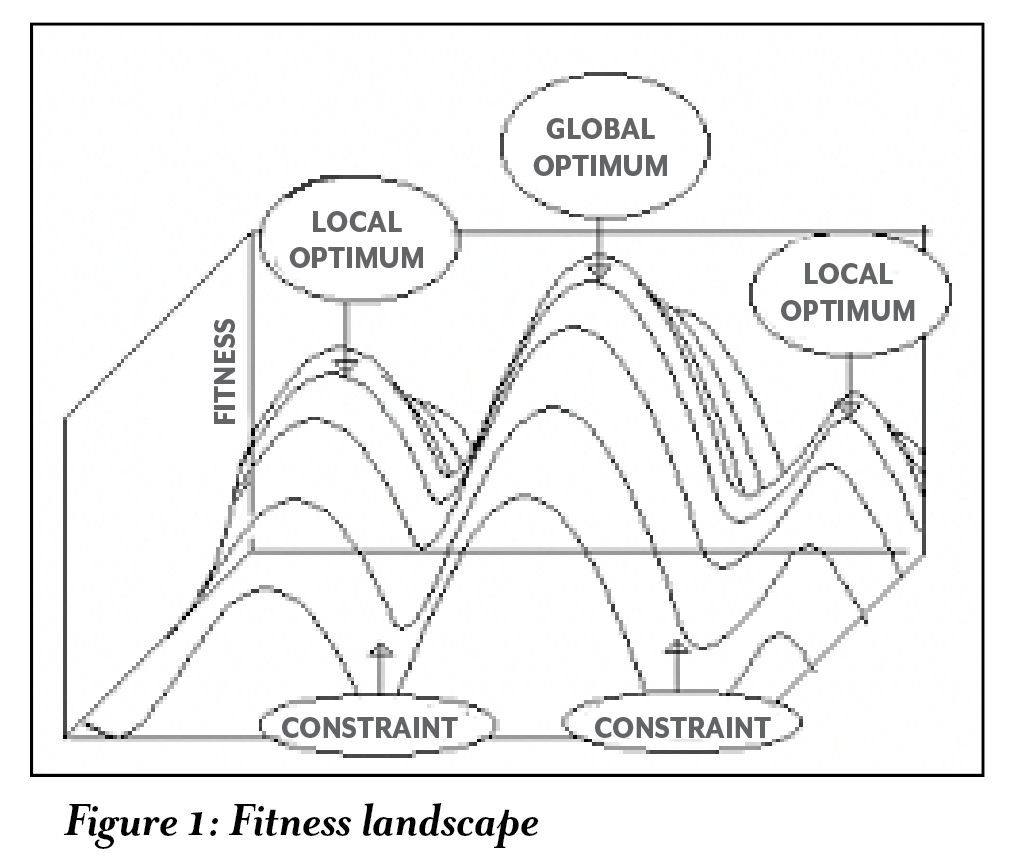 Figure 1 shows a simplified fitness landscape with three optima. Depending on where a population starts, it can only reach the closest peak, as natural selection will always increase the mean fitness of a population.

Radically new technologies as well as large innovations within organisms or in societies have always required a corresponding transformation of the underlying fitness landscape. The iPhone was successful because it did not compete as a phone, where it would have lost, but as a new platform for a whole ecosystem of apps. Similarly, major long-term historical developments, including the scientific and, later, industrial revolutions, had their origins in major upheavals, such as the plague, that radically changed entrenched structures and constraints (both internal and external).

Early indications signal that COVID-19 may be such a disruptive event. At a time when it seemed almost impossible to accomplish major systems transformations needed to combat climate change and related challenges — not because of a lack of knowledge, but because of multiple constraints connected with globally interconnected systems — the current shock might open up a window of opportunity. The actions needed to combat the crisis are changing existing external constraints and also rewiring long-entrenched internal relations. This time of disruption is also one of opportunity.

Listen to SFI President David Krakauer discuss this Transmission in episode 29 of our Complexity Podcast.

SCIENCE AS CRISIS RESPONSE: A NEW FRONTIER FOR COMPLEXITY SCIENCE

Major crises including pandemics, natural catastrophes, civil and international conflicts, and technological disasters are inevitable, as are their cascading consequences across social, economic, and environmental systems. Due to the increased interconnectedness of global systems, we now confront a whole new category of risk, often identified as global systemic risks, for which well-established practices of risk management and scientific analysis no longer suffice.

Managing global systemic risks requires scientific insights and guidance, but as the COVID-19 pandemic is revealing, traditional scientific practices are ill-equipped to provide those in a timely manner. A July 24, 2020 Science news feature by Paul Voosen concerning more accurate climate models perfectly summarizes this predicament.1 A scientist involved in the study to narrow the bounds of climate sensitivity stated that we are today “light-years ahead of where we were in 1979,” but Voosen concludes that “unfortunately, the years of work needed to attain that certainty came with a cost: four decades of additional emissions and global warming, unabated.” In the context of COVID-19, we have observed efforts to accelerate the scientific response, mindful of the human cost in waiting to achieve conventional certainty. But what does this mean when science is uncertain?

The scientific community has been pushed beyond the traditional role of science and into a mode of science as crisis response, which includes shaping rapid policy decisions as well as accelerating scientific activities within traditional research tracks like vaccine and drug development. Traditionally, scientific research is iterative and methodical, using peer review to vet contributions. In contrast, science during a crisis is accelerated, based on limited information and in many instances published ahead of the rigor and scrutiny of the peer-review process. In addition, the nature of the problems underlying these crises does not map onto well-established scientific disciplines and their narrowly defined conceptual and methodological structures. Rather, all these problems represent challenges of increasing complexity and require a scientific framework capable of addressing these issues.

COVID-19 serves as a preview of what is sure to become a more prominent mode of science as natural and social crises amplify in our complex, interdependent world and the time windows for necessary science-based responses shrink. The global interconnectedness of the world makes it more urgent to respond in real time and the global interconnectedness of science makes that possible. Modern communication tools facilitate rapid dissemination of ideas and results, and misinformation, and social media add a new dimension, including challenges to scientific authority.

Complexity science is uniquely equipped to become the foundation of science as crisis response. But in order to do so, we need to confront a number of epistemological and organizational challenges: How does acceleration lead to increasing levels of uncertainty? What criteria are we using to assess results? How are dealing with the fact that any intervention based on incomplete knowledge will change the intrinsic dynamic of the system? What are the patterns and consequences of this type of science? How has the communication and dissemination of knowledge changed? Has the rate of scientific convergence or divergence changed due to the nature of the crisis response? Who are the scientists that are most listened to and who have the biggest influence in shaping responses to the crisis? Are these the same who advance knowledge? How is scientific disagreement handled during a crisis?

Answering these questions will help us gain a better understanding of the structure and dynamics of science as crisis response. What we are confronting here is actually a threefold (minimally) problem of complexity:

1. The complexity of the underlying problems. As we have seen, COVID-19 is not just a pandemic, it has revealed complex interdependencies between molecular, immunological, ecological, evolutionary, economic, social, behavioral, cultural, and political processes, which we are only beginning to comprehend;

2. The complexity of the crisis response. The sheer magnitude and urgency of the COVID-19 pandemic has revealed serious flaws and challenges in our systems of crisis response as well as how unprepared all relevant institutions (including science) were, despite frequent warning signs that something like COVID-19 was likely to happen; and

To conclude, the inevitable shift towards science as crisis response is a call to arms for complexity science. How well we will be able to meet these challenges will determine the future path of humanity. It is already obvious that small incremental changes will not be sufficient and more radical transformations of knowledge, action, and the structures that support both are needed. And for all of those SFI is uniquely positioned.