Instead of blood pressure, temperature, and respiration, the vital signs for a forest are captured in key traits such as the amount of nitrogen in a tree’s leaves, the leaf area, or the density of the wood. These “functional traits” can impact how trees grow — and therefore how forests respond to climate change. While researchers have begun trying to tease out these patterns in recent decades, incomplete data has made it difficult to understand what’s happening to particular traits in any meaningful way — especially when you get down to the level of individual trees in a forest.

To help fill this important knowledge gap, Daniel J. Wieczynski and SFI External Professor Van M. Savage, both ecologists at the University of California-Los Angeles, and their collaborators decided to analyze existing data from trait studies on forest communities to see what could be revealed about these shifts on a global scale.

“One of the challenges is that you need a lot of data to accurately measure functional diversity,” says Wieczynski. "So our idea was to take what functional data we have available from databases and pair this with locally collected field data, as well as data about species abundance, to say something about climate-biodiversity relationships that we couldn’t say before.”

The team, which also included SFI External Professor Brian Enquist (University of Arizona), amassed data from 421 tree communities around the world, including information from 55,983 individual trees from 2,701 species, and examined a range of “functional traits” that influence individual growth, such as plant height, wood density, leaf area, and the amount of carbon, nitrogen and phosphorus in a leaf. To determine the climatic conditions these tree communities are living in, they also analyzed the temperature, precipitation, wind speed and vapor pressure in each one.

The study — one of the first to examine how climate is influencing functional traits in forest communities on a global scale — found evidence of major changes in these traits, which could affect forest productivity and composition and even how forests are distributed around the globe. And they found that climate affects nine different traits in various ways: For example, they discovered that leaf area is most influenced by vapor pressure and temperature, while height is primarily affected by temperature variability. To the authors’ surprise, two climatic factors in particular had an outsized effect on trait diversity overall: temperature variability — not just mean temperature — and vapor pressure. They also found evidence that forests are currently shifting their traits in response to global warming. 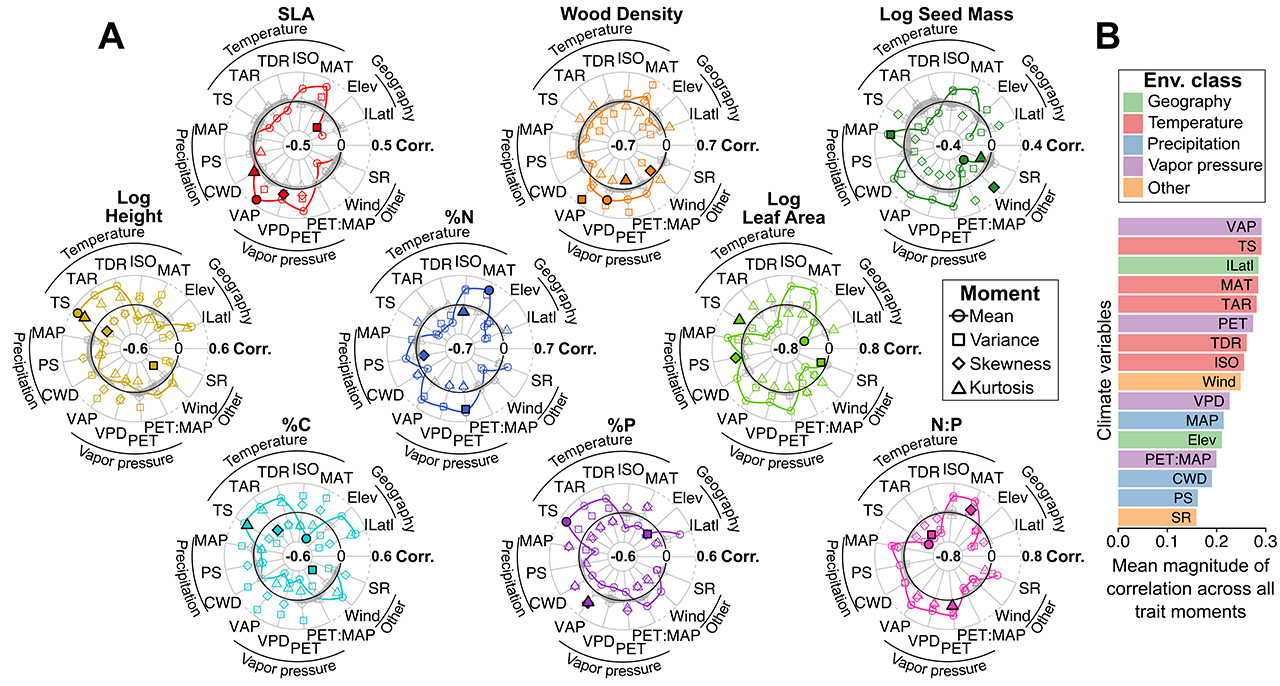 Wieczynski and Savage hope the work could help improve the accuracy of computer models that try to predict how forests will respond to climate change in the future. “ By calculating a more accurate relationship between functional diversity and climate, using the methods we used, we’ll be able to more accurately predict those changes in the future using these models,” Wieczynski says. "And hopefully this will show it’s important to measure more trait data in communities, or more individual level information in communities than just species-level information.”

“I think these results will be useful to determine climate change's effects on ecological systems,” Savage says.

This is just the start in gaining a better grasp of how climate change is affecting functional traits in forest communities, Wieczynski adds. "The next step is to go out to do new field studies where you actually measure trait values for more individuals.”

What defines ‘us vs. them’ in U.S. political discourse?

Creating Turing patterns in the lab

Research brief: You can have your niche construction and foraging theory, too

Cancer evolution, from cells to species and back

Rajiv Sethi and Brendan O'Flaherty on 'Policing as a Complex System'

Research brief: Where should you park your car? The 1/2 rule

What are the Laws of Life?