Throughout history, portraits featuring the human profile have evolved to reflect changing cultural norms. A new study led by Helena Miton, a Santa Fe Institute Omidyar Fellow, and co-authored by Dan Sperber of Central European University and Mikołaj Hernik, of UiT the Artic University of Norway, shows that human cognition plays a critical role in the evolution of human portraiture.

To test their prediction, the research team looked at 1831 paintings by 582 unique European painters from the 15th to the 20th century. They not only found evidence that this forward bias — where painters put more open space in front of their sitters than behind them — was widespread, they also found evidence that the bias became stronger when cultural norms of spatial composition favoring centering became less stringent.

The portrait on the left (Adrian Brouwer, 1630) is an example of a composition with the sitter centered. On the right, a portrait by Pierre Auguste Renoir (1905) shows the forward bias, with more free space in front of the sitter than behind her. The study showed this type of spatial composition increased over time. 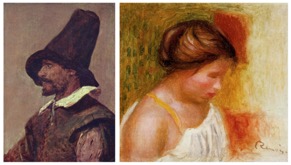 “Culture and cognition are two interacting domains,” Miton explains. “With most cultural phenomena, you’re going to have some kind of influence from cognition. Our idea is to work out how we identify these factors and how we work with that type of causality.”

According to Miton, this research approach can be extended to quantify in a more general way (and with a more general painting data set) how much artistic norms loosen and how much variation increases over time. Beyond the art world, the approach can also look at the role cognition plays in other cultural phenomena, from writing systems to medical practices.